Menu
GIVE
YEAR OF JUBILEE

The Return to Freedom in Christ

Praise the LORD that He has led EFCLA through the past 50 years. Let us worship Him, for it is indeed God’s grace that we are able to arrive at the year of jubilee. It was during the 1970’s when a group of Christian students from Taiwan formed the EFCLA to worship the LORD and to partake in The Great Commission. The vision was to extend the kingdom of God by spreading the Gospel in their native tongue for all who would receive Christ and become children of God.

Praise the LORD that I was led to ministry in September of 1975. Through God’s grace and the efforts of brothers and sisters, the church gradually grew. When the oil crisis hit in the 70’s, the Spirit moved me to reach out to other cities where I may further spread the good news. Soon after that, we established EFC East Valley and EFC South Bay in 1979 and 1980. Afterwards, we were able to establish two more churches in San Fernando and Orange County, as well as EFC General Assembly on October 16th, 1982. Our goal was to follow through with the Great Commission of Christ:“Therefore go and make disciples of all nations.”

In 1986, the General Assembly leaders envisioned “9025,” a mission to take part in God’s grand scheme in rescuing a million lost souls. It was then the LORD moved us to take root in Australia and New Zealand, and began planting churches outside of the US. In April of 1990, the 25th church congregation was formed in Sydney.

In 1996, we once again envisioned “2050” where our goal was to reach 50 congregations across the continents. We brought the gospel back to our hometown Taiwan during 1997, and by December of the year 2000, the 50th church was established in Taiwan, accomplishing the goal of “2050.” We gave the LORD our deepest gratitude that we’re able to persist in this vision, in which gave us 147 churches around the world. (41 in North America, 18 in Australia & New Zealand, 78 in Taiwan, and 10 in places across the globe.) As we step into the 51st year, let us keep this vision fastened inside our hearts and continue the good work in saving lost souls.

When it comes to the year of jubilee, it leads one to think about what Christ said at the start of His ministry: “to proclaim the year of the Lord’s favor.”(Luke 4:19) In regards to the word “jubilee,” the Bible states: “Consecrate the fiftieth year and proclaim liberty throughout the land to all its inhabitants. It shall be a jubilee for you; each of you is to return to your family property and to your own clan.” (Lev. 25:10) Therefore, the year of jubilee is also a year of holiness, and there were two indications of this. First, to be “liberated” just as how slaves are freed; and second, to be “returned” just as how they were returning back to each of their homes and properties that were given by God.

During the celebration of the year of jubilee, keep in mind that this is a holy year blessed by God. It is for every EFCLA member to receive freedom in Christ without the bondage of sins and worldly desires, (Romans 8:1-2; 2 Cor. 3:17) as well as returning back to the kingdom of God. It is not only ourselves that should return to God, but also to those who were once our brothers and sisters. We should seek them out and lead them back to the house of God during the year of jubilee. In this way, we can receive the Word of Life through Christ, and enjoy a life of freedom in God’s glory. 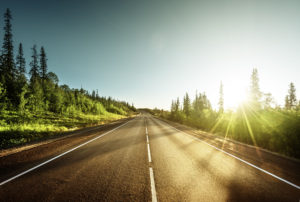 To celebrate EFC’s 50th anniversary, Stream of Praise Music Ministries produced a beautiful song “A New Way” to commemorate this milestone. Special thanks to Rev.